For the past 2 years, I’ve worked extensively with B2B services which include both using and for the most part building B2B services using/connecting multiple 3rd party APIs. This blog post is about a design pattern which I recently had to implement for such a service.

That’s not the case when something wrong happens in the backend. At least not all the time. Often times we have to implement cron jobs, multi-step workflows, data aggregation pipelines which can include multiple API calls in a single operation and if any of the call fails then depending upon the implementation the whole operation could fail which is a waste of time and resources. Let’s see an example that will give some clarity.

This aggregateData looks like it’s doing a lot as it interacts with 2 different 3rd party APIs. Now suppose we get a successful response from Facebook, LinkedIn, Instagram, Twitter, and Reddit but the call to Gmail fails for some reason. The function would quit by throwing an error and we would have to run the function again to get the desired results.

Now imagine each call to an API has a fixed price. Say $0.005. In our case we were calling around 20 different services in one single operation for aggregating the results. Failing of just one and with that re-running the whole thing again was much more expensive than somehow retrying a each call at least a few times on a failure.

The aggregateData function is actually a very light function because it actually does no heavy synchronous computation. It only calls a bunch of APIs asynchronously and this is where Node.js shines. Thanks to the Reactor Pattern which is all over at the core of it.

So now, I decided to write a higher-order function which would wrap my API calls. It would atleast call that API n times until it gets a succesfull response.

This magic function could be implemented using JS closures but I decided to use JS Promises. Reason ? clean and easy to follow implementation.

Remember that “Simple is Beautiful”

Before we see the implementation we must know two important characteristics of promises and async functions that would play a major role.

By making use of the above two characteristics of promises and the good old recursion. We could implement a function that would call itself n number of times before it quits.

This is only possible because of the two characteristics that we saw above. We could even make it better by allowing it to wait for some time before trying to resolve the promise again.

Now with this utility function in our toolkit. We would re-write our aggregateData function.

Now each call to a 3rd party API will behave in a way similar to what is shown in the diagram below. 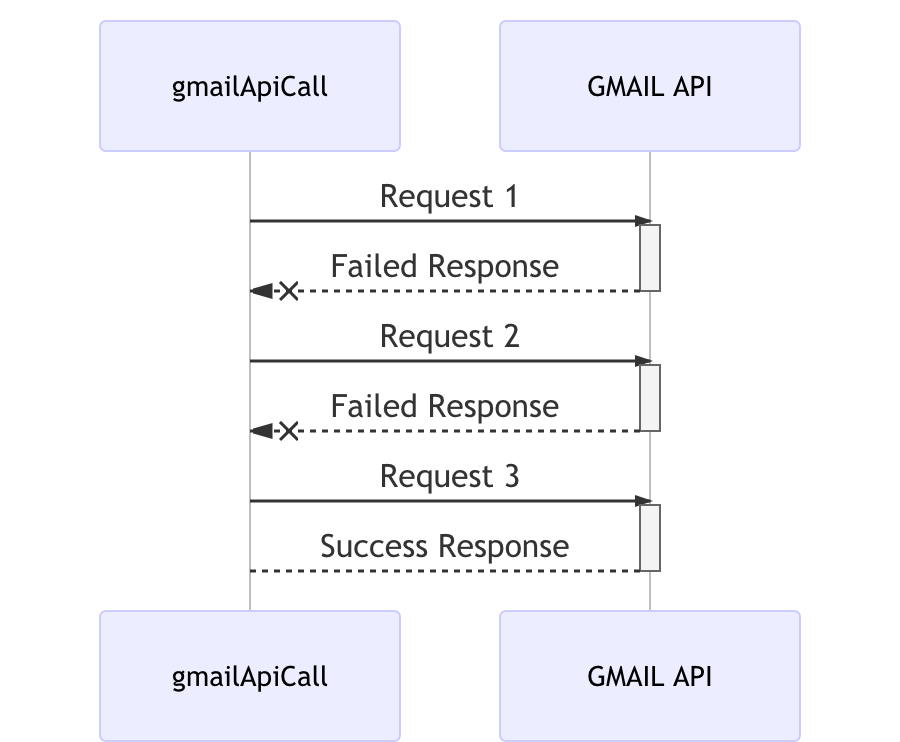 Of course this is not the only way or the best way to solve this problem but it makes it a lot better. In our case, it certainly did bring down the number of times the function was getting called on a failed response.

One thing that I also want to emphasize on is that we don’t have to use npm packages for functionalities that we can implement in our codebase without over-complicating stuff. npm packages come with an overhead of maintenance. I can modify the retryPromise function however and whenever I want according to the change in needs. That would not be the case if I was using some npm package.

Thank you for reading this article.