Compare it with the function component below which requires much less code.

This is just one component, imagine having a large number of simple components like this. Not only will it increase the size of the code, but it is also not very productive having to write the boilerplate while creating simple components.

This pattern (function components) is designed to encourage the creation of these simple components that should comprise large portions of your apps. In the future, we’ll also be able to make performance optimizations specific to these components by avoiding unnecessary checks and memory allocations.

Before react hooks, function components were called stateless components. So, if the component did not require any state, it was recommended to write it as a function to get a performance boost. It was frustrating to refactor your function components to a class whenever you wanted to use local state in it. Good thing this is not the case anymore with the addition of hooks 🎉 specifically the useState hook.

This is one of the most compelling reasons for writing your components using functions. You see, state management in class components is done by modifying the value of this. The behavior of this keyword could introduce inconsistencies in your class methods if they are asynchronous (see below example). The reason for these inconsistencies in most of the cases is that the value of this in the lifetime of an execution of a function could change.

This is not the case with function components where each render gets its own unique state and props using JS scopes.

The below image depicts this issue with some visuals. See the digram flow in this order 1 -> 2 -> 3 -> 4 -> 5 -> 6 which is how Javascript will execute the above React code on multiple clicks. (Open in a new window to zoom in)

A quick way to solve this issue in class components is to destructure the this value.

Alright, enough of why write function components using hooks. Let’s see how to think about hooks, specifically the useEffect hook.

A problem with this mental model is that is is very limiting. It limits us from correctly using hooks and exploring outside of the obvious use case of componentDidMount and componentDidUpdate.

After using them for a while now, I think of useEffect as a place to perform side effects in a component. One has to unlearn the idea of componentDidMount and componentDidUpdate to think of it like that. 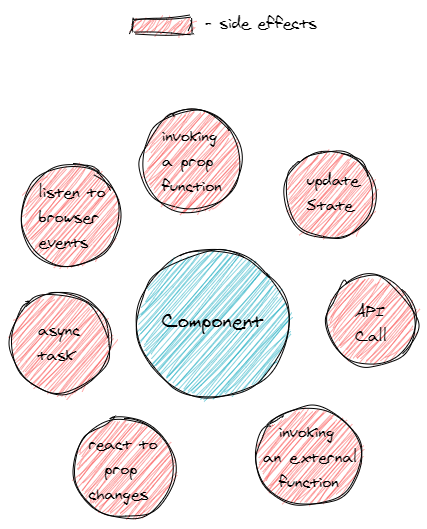 The side-effects shown in the above image are a good fit for useEffect.

Another thing that helps in better understanding this new mental model is to think of a function component’s lifecycle as a timeline of renders i.e A component in its lifetime renders multiple times. Each render call gets its own unique copy of the variables, funtions, props, and hooks defined inside of the component function.

Note - Each render doesn’t necessarily mean that its corresponding DOM was also updated.

The highlighted function inside the first react component is not a hook but it is performing a side effect(API call). The second version is using a useEffect hook for the same. So how the hook version is any different from the non-hook version.

The only benefit of using the useEffect, in this case, is that you would not have to compute the value of the variable firstRender which would require some logic and state. In case of the useEffect, the dependency list will take care of that. It will make sure that it is only run after the first render and never again in the current lifecycle of this component.

So why use the useEffect hook if we can do something similar with using regular JS functions?

Well, it provides a lot of built-in features that we’ll not get when using plain functions for side-effects. Hooks are regular JS functions on steroids 💪.

The dependency list in the hook lets you define which variables will trigger your side-effect on change. This is super useful as you can exactly define when your side-effect runs. This is not possible to replicate, as to see if any variable has changed we need its current value as well as the previous value and in function components, we only have access to the current values of props.

Let’s say I have a component receives 10 props and I only want to run my side-effect when there is a change in one specific prop. This is an easy task as I can define my hook with the side-effect and I will add the prop which should trigger the side-effect as a dependency. Now, no matter how many times the other props changed or in other words the component re-renders, the useEffect side-effect will only run when there is a change in the props defined in the dependency list of our hook.

Let’s consider a more practical scenario, you have a component that receives a userId prop and it subscribes to a WebSocket channel to get the latest messages from that user in real-time and show it on the UI. Subscribing to a WebSocket channel is an async task so this is clearly a side-effect that we need to run inside of a hook.

When you select a new user to chat with, you would want to close the WebSocket channel for the previous user and subscribe to the WebSocket channel for the new user. This would mean that our side-effect should only run when there is a change in the userId prop. Also, before it runs for a new user, it should unsubscribe to the previous user from its WebScoket channel.

As shown in the above image, although the component renders multiple times, it only executes the side-effect of subscribing/unsubscribing users when the userId changes. This is powerful. But wait, what’s that cleanup function? where and do we define it?

useEffect gives us a neat way to define a way to perform cleanup for our side-effects.

During the lifetime of this component, useEffect will only perform cleanup for a previous side-effect whenever it runs side-effect again. In the above image, it unsubscribes to userId 12 before subscribing to userId 20. Now, how cool is that?. This is not available in class components.

I think useEffect API is much more intuitive than options available in a class component. You just have to start thinking in terms of side-effects and when to run these side-effects. Thank you for reading this article. If you want to make any changes please submit a PR here.