At Gerald, we have a fairly medium-sized AWS infrastructure with workloads that span multiple domains. We’re using more than 50 different AWS services. For any change in our AWS account, we use CloudFormation (I’ll refer to it as CFN).

We were heavily using this feature across our stacks but very soon the cross-stack dependencies started to grow which would frequently break the CI/CD pipeline which was still okay as there are valid reasons for the restrictions listed above but it’s also not a very pleasant experience to deal with it. 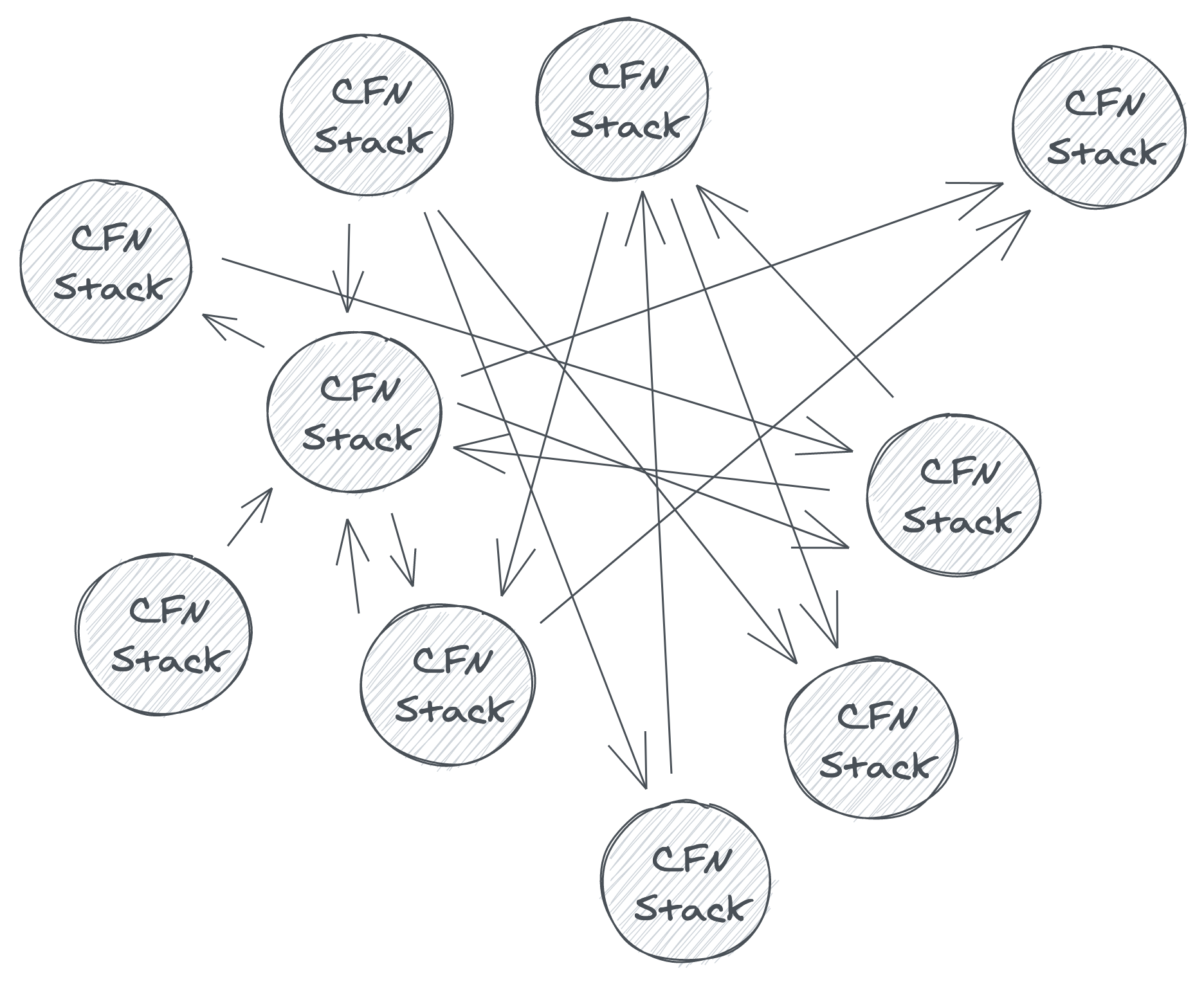 I’ll explain it using an example. Let’s say we have two Node API servers. Both make use of some AWS resources that are created by a CFN Stack. 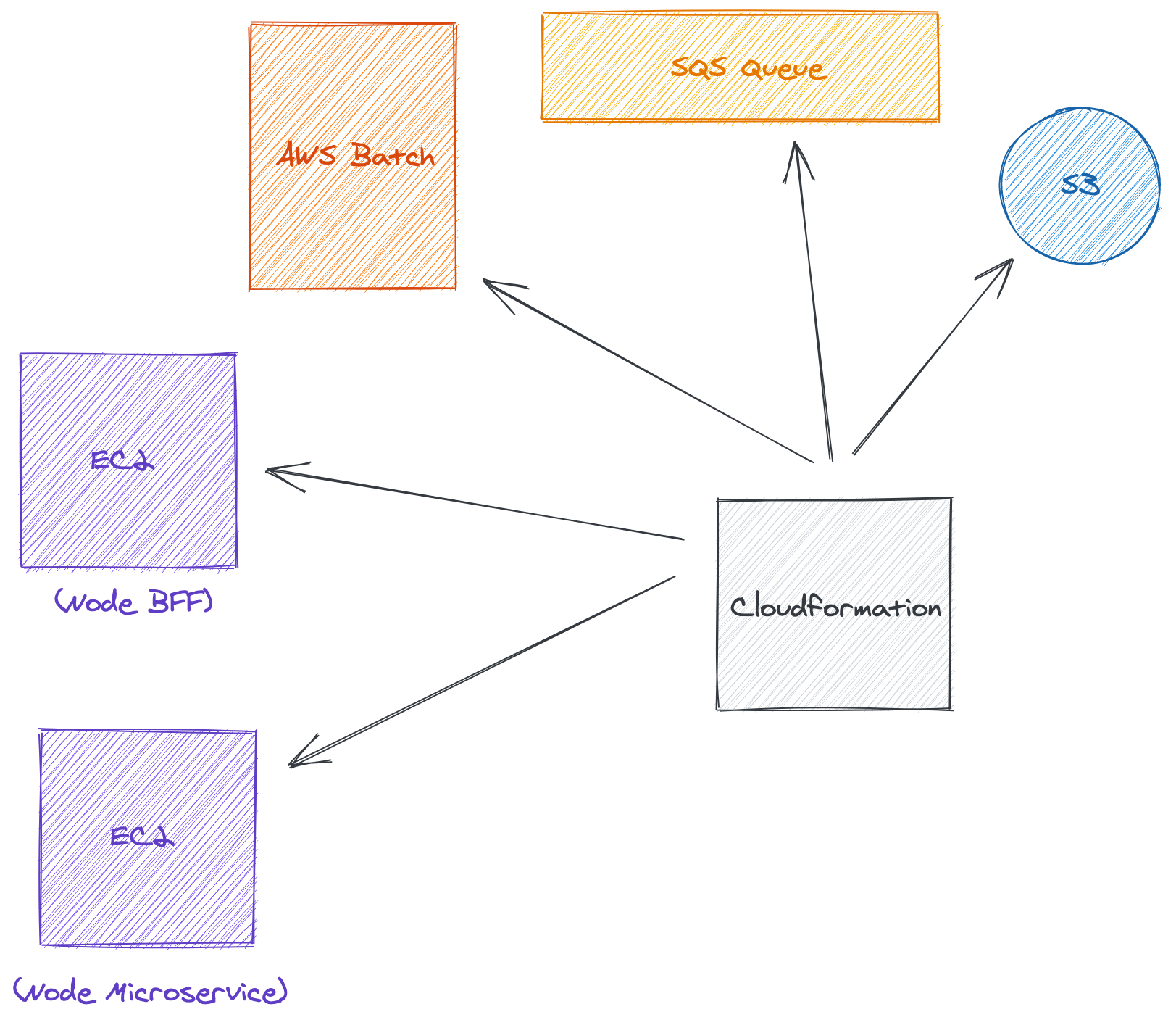 Their normal operations include queuing items to an SQS Queue and uploading files to an S3 Bucket. For these operations (API calls) we were using AWS Node SDK. 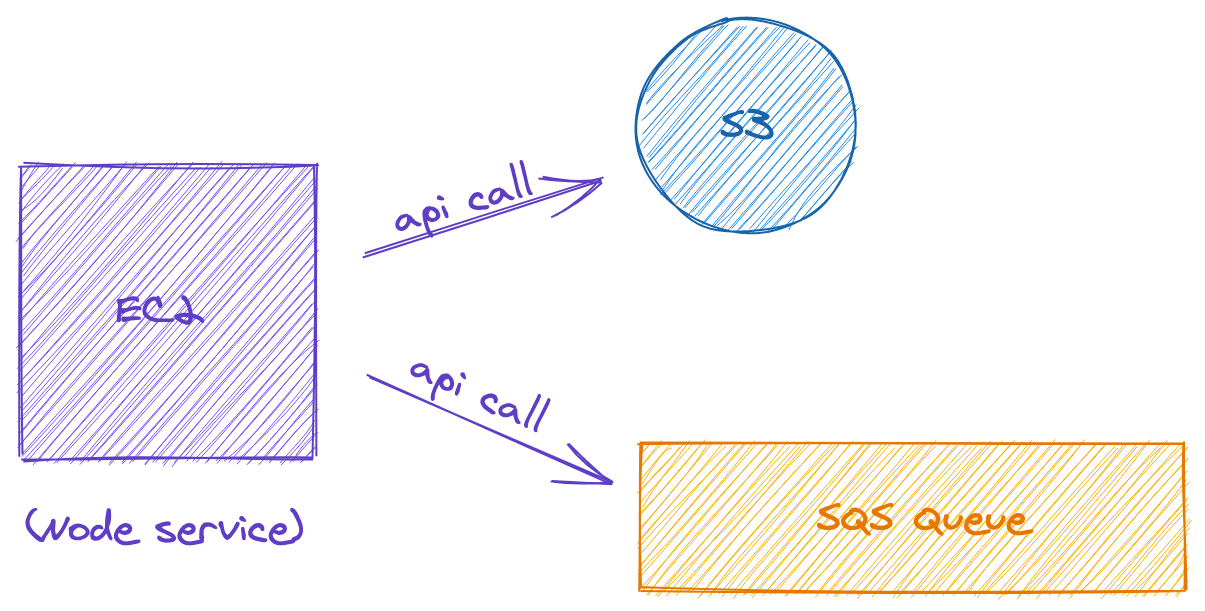 What do these servers need in order to do that?

It would be a terrible idea to hard code these values in the codebase. These values should be provided to our application through a different process often times via a CI/CD pipeline. There are multiple ways for doing that for example making these values available in the EC2 shell environment either as a config file or as environment variables. 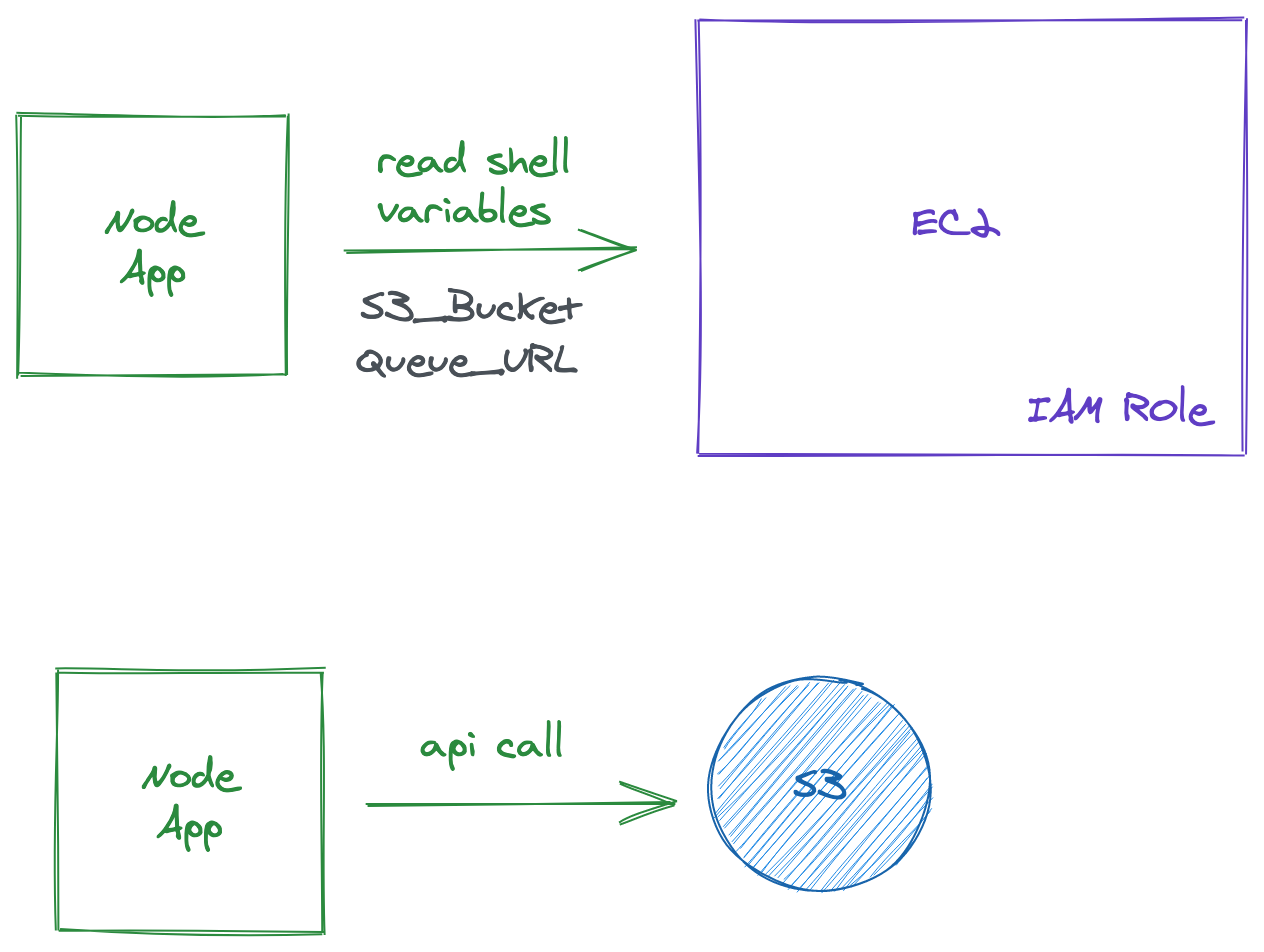 SSM Parameter Store is a cloud key-value store that can be used to store plain text and encrypted string values that can be referenced in applications and scripts using keys assigned to those values. So if I want to store my database username and password in SSM parameter, I will create a key-value pair for both of them in the SSM Parameter Console. Now, I will be able to access the username and password using their assigned keys in my application.

Here’s a picture of its console interface. The Name column represents all the Keys in your account and region.

Instead of storing the secrets as environment variables, we use SSM Parameters. The Node app would call the SSM Parameter API to get all the required values before starting the server so it doesn’t have to get these values again as long as it doesn’t restart. See code below. 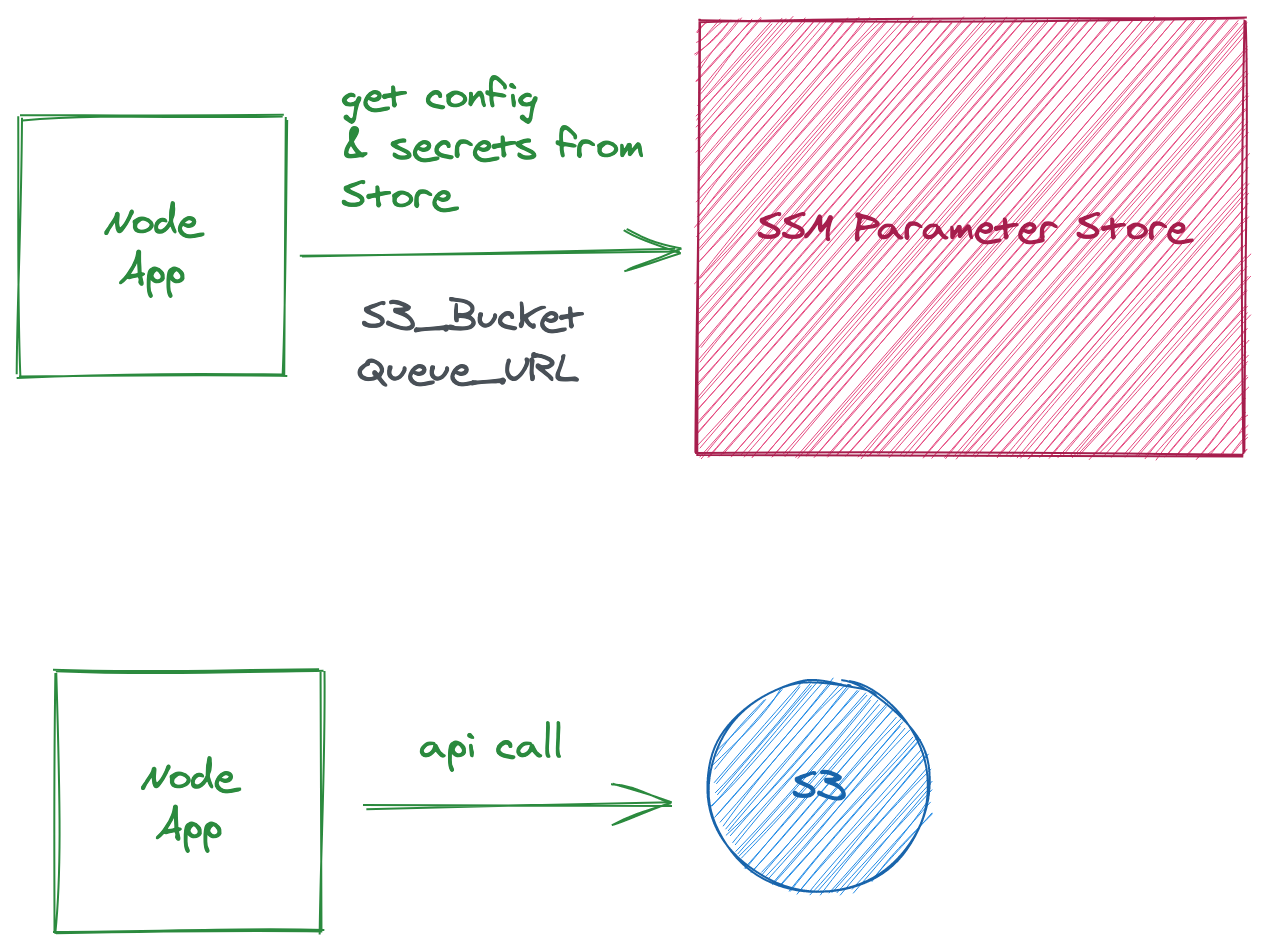 The benefit of storing your cloud secrets in the Parameter Store is that you don’t have to put them in the EC2 shell anymore. You don’t have to PREPARE your EC2 instances to run your applications.

If you need to configure your EC2 instances for running your applications you can also consider using Docker.

This is also more secure than storing your secrets in the environment shell. Add IAM on top of this and it becomes even more secure.

This was definitely a good starting point but it required manual work not just to initially set it up but for updates as well. Whenever one of our CFN stacks would create a resource, I would go to the SSM Parameter Store console and create its key-value pair. Then I would copy that key in our application codebase.

This process would be repeated every time CFN creates a AWS resources that needed to be accessed in our backend application. Even worse, sometimes CFN would silently replace resources(instead of update) thereby changing its ARN, URL, Name, ID, etc while the application code would still be referring to the old values stored in SSM Parameter Store and we wouldn’t even know until the application would break. 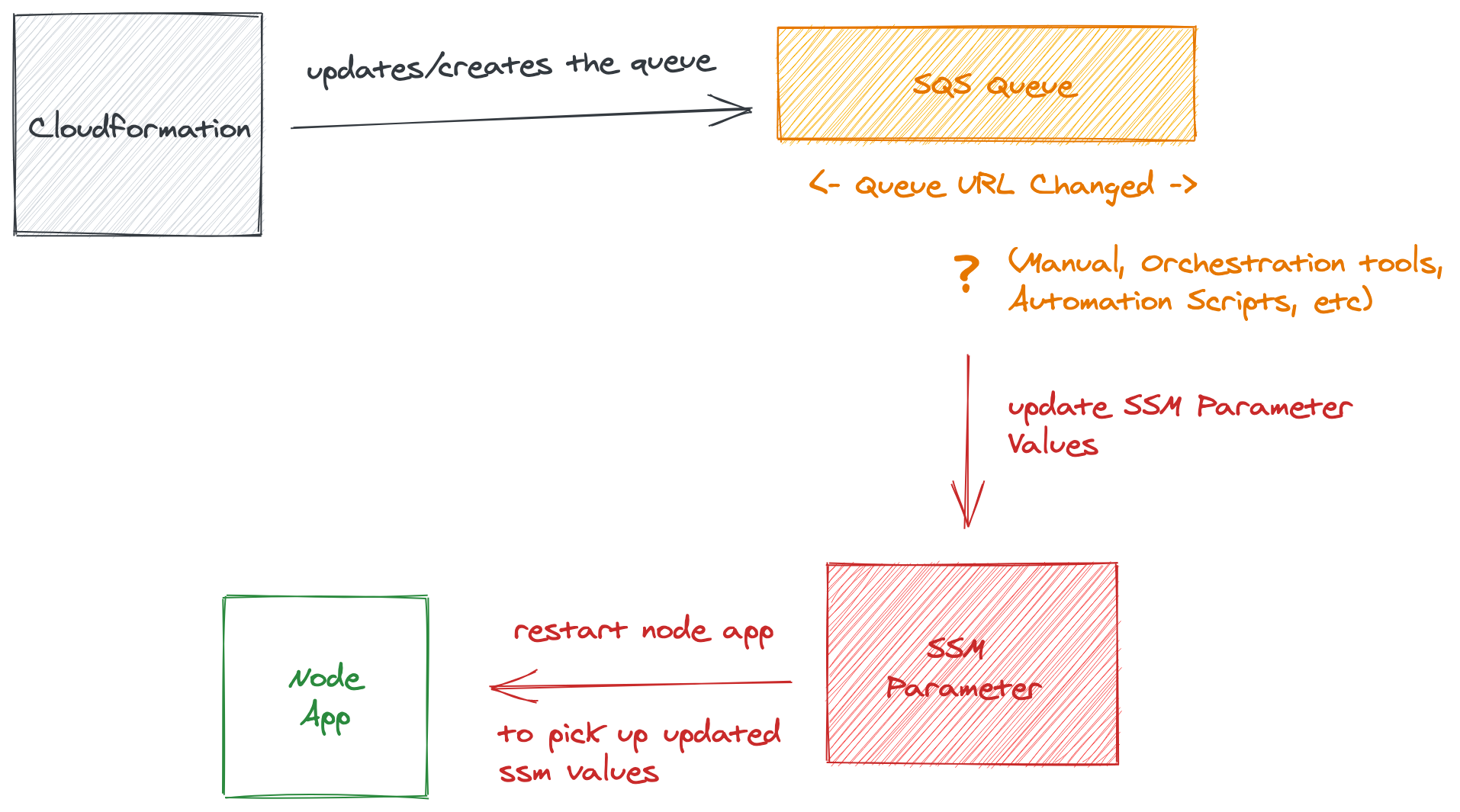 This quickly became a bottleneck for our fast-paced development team. Every time someone would make a change in the CFN templates we would check if we need to update anything in the SSM Parameter Store. If yes, after updating the value in the store we would also have to restart the Node servers using that value.

We had two problems to solve. The first was to automate updating the SSM Parameter Store with newer values and the second was to be able to pick the updated values in the store without any downtime or restarting the servers.

The first solution that we thought of was not very easy to set up as it included a lot of components. Anytime CFN would update or replace a resource, we would listen for that event (CloudWatch + EventBridge) and invoke a lambda function to process those events. The lambda would essentially do two things.

The second solution was based on the fact that SSM Parameter and its key-value pairs are also AWS resources so they can be managed by CFN.

So when we are creating, updating, or deleting resources through CFN, why not we also create, update or delete their corresponding SSM key-value pairs within the same template. See the template below.

So we added SSM Parameter Store entries for all of the resources in all of our CFN Stacks.

This solved our first problem. I knew that solving the second problem using Lambda would be complicated so we got rid of the problem itself 🤯.

Following this approach, we didn’t have to restart the application when the Store value would change since the application is always loading the latest value from the Store at that very moment when it needs to access it. Of course, you can add some caching mechanism to that but always remember to have a cache invalidation process in place. 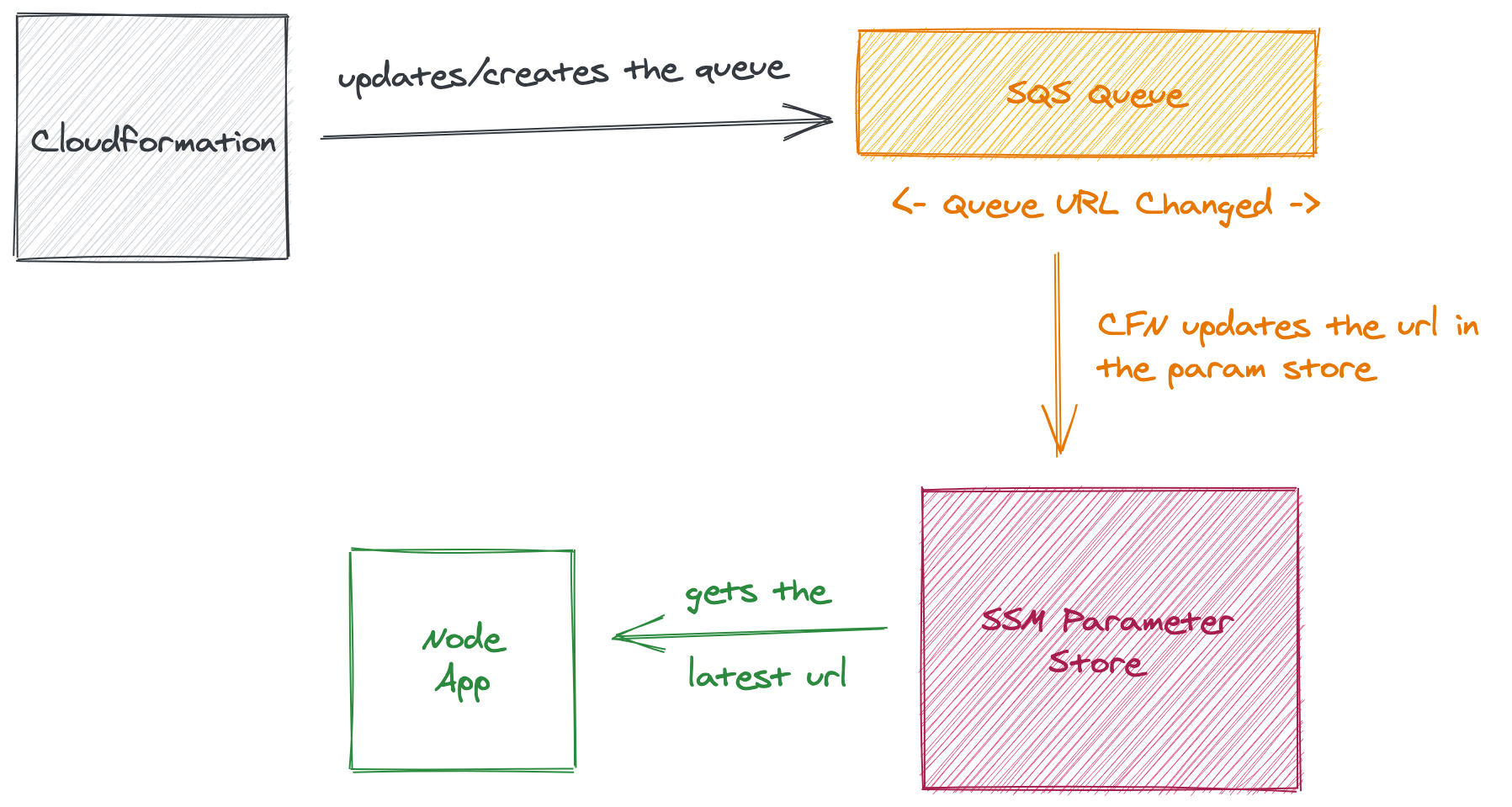 We were quite happy with the results, the only thing left to figure out was that how will different applications know what is the Parameter Store key of a resource that it wants to access.

This was fairly easy as we were already using a shared npm package across multiple projects so we exported a JSON object in that package which lists all the resources and their keys.

Then we can use it in our applications as shown below.

And we use the same keys when creating these SSM Parameters in the CFN templates.

Whenever we want to add a new resource to our CFN Stack we create a new entry for it in the ssmKeys and use the same key in the CFN template. By following this approach, it has become so much easier to access all of our AWS resources for various purposes like monitoring, api calls, etc across multiple projects.

Another benefit that we found out later is that you can also use SSM Parameter Store keys to refer to resources across multiple stacks similar to the cross-stack reference feature but without any of its limitations. We’ve removed all of our stack exports and imports across all of our CFN stacks and replaced them with referencing resources via SSM Parameter Store.

SSM Parameter Store is one of my favourites AWS service that can be used in so many different ways to solve a lot of problems. I highly recommend trying it out. You can also reach out to me at my twitter if you have any questions related to this.